Top Five Wii U Games That Best Use the GamePad

It's no secret that many developers, including those within Nintendo, have been clueless as to how to incorporate the Wii U GamePad successfully into their games. It doesn't say much for the controller when the recently released Donkey Kong Country: Tropical Freeze only used it for off TV play. Otherwise it simply showed a black screen. Still, there are a selection of titles that do make fine and even highly creative uses of the Wii U's special controller. These five games are what SuperPhillip Central's staff deems the ones that implement the GamePad best and in a variety of ways.

We start our top five countdown with a game that was originally scheduled to be a Wii U exclusive. Rayman Legends was set to release in the February following the Wii U's launch in November 2012. Unfortunately, Ubisoft's launch offerings failed to reach their sales expectations and resulted in Legends being delayed in order to be ported to other systems. Despite all this, we proclaim that the Wii U version of Rayman Legends is still the one to get. It was built for the Wii U GamePad, and it works remarkably well. 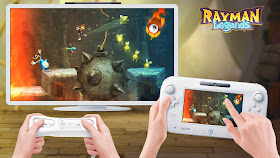 Rayman Legends has particular levels where the GamePad player controls a flying insect named Murfy. Either with the AI controlling the character doing all of the platforming or a human doing that work, the GamePad player uses their finger or stylus to interact with the environment. From sliding platforms for the player to climb aboard or moving obstructions out of the way, the Wii U GamePad is utilized in creative ways that make for an innovative gaming experience. A subgroup of Rayman Legends fans prefer to simply press a button to make Murfy do things (this is only possible in the ports, apart from the Vita version), but for the freshest and most fun take (obviously subjective) on this excellent platformer, the GamePad is the way to go. 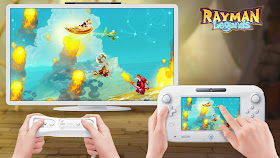 Nintendo has really struggled to show compelling reasons for the Wii U GamePad's existence in its own games. However, Wii Party U is a title that showcases many ingenious uses for the tablet-like controller. While the majority of mini-games are played simply with the Wii Remote, the 1 vs 3 mini-games have the sole player using the GamePad while the others use the Wii Remotes. This asymmetrical gameplay isn't just limited to the mini-games of Wii Party U. 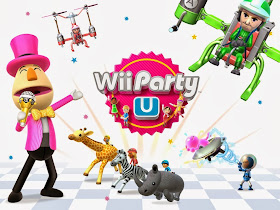 Alternative modes that aren't board game related present great examples of how the Wii U GamePad can be utilized in many different ways. Name That Face has the GamePad user snapping a photo of their face that matches the clue given to them. Then the other players have to solve what the GamePad user's expression actually means. Lost-and-Found Square has three Wii Remote players scrambling to find the GamePad player, who assists the others in finding them by describing landmarks and places of interest around them. Sketchy Situation involves passing around the GamePad. Each player draws the item listed on the screen. However, one player has a slightly different item to draw than everyone else. The players that identify which player's item is different from the others earn points. 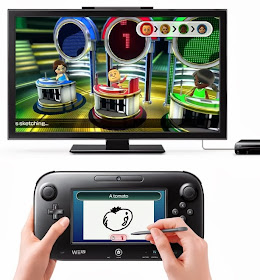 Alongside fun games for group sessions, there are an admirable amount of tabletop games. These games are played solely on the Wii U GamePad, having two players share it. One player is on one side, another player is on the other. Such simple to pick-up-and-play games include foosball and baseball. The point is that Wii Party U shows an incredible amount of inventive ways to use the Wii U GamePad. 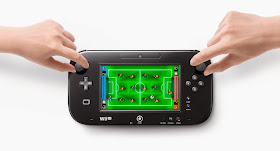 It's easy to implement a wide range of uses for the Wii U GamePad into many short, independent mini-games, but what about a single full-length, narrative-based, action/stealth game? One is more limited in the ways they can apply the controller to this type of game without it feeling shoehorned in. Deus Ex: Human Revolution - Director's Cut is such a game that uses the GamePad and uses it well. There's of course a convenient means to play the entire game on the GamePad's screen exclusively, but there are several in-game applications that are more original in concept. Such things include using the screen as a radar, map, and infolog; looting downed enemies as well as hacking with a touch of the screen,; accessing inventory; sniping enemies; and much more. These applications perfectly show the Wii U GamePad as an enhancement of the gameplay of Human Revolution. It exhibits how the controller can be implemented into things other than mini-games, off-TV play, and a screen for the game's map. 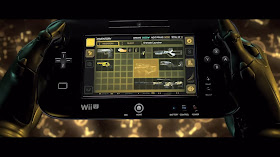 Many will scoff and turn their noses up to Nintendo Land, believing it is just another mini-game collection. However, Nintendo Land is made up of twelve unique attractions, each with an impressive amount of content, stages, and challenges to them. Some more than others. Regardless, the majority of games create enough novel practices for the Wii U GamePad that makes us confused why Nintendo didn't just further experiment with these applications in fuller games.

Take Mario Chase, for instance. That game has a Mii dressed up as Mario being chased by several Miis in Toad costumes. The Mario Mii is controlled by the GamePad player, who gets to use the map on the screen to show where his Toad pursuers are at. This allows the Mario Mii to plan out the appropriate path to avoid the other players. The chasers do not get the luxury of a map. Instead, they must find the GamePad player, call out where that player is, and tag him before time runs out. 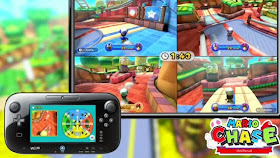 Then there's Yoshi's Fruit Cart. The TV screen shows where all of the fruit the player driving a Yoshi-shaped vehicle must devour, the goal that the player must drive through once all of the fruit in a stage has been eaten, as well as the holes and other obstacles they must avoid. With the Wii U GamePad, the player must draw a path to get all of the fruit, avoid any hazards, and reach the goal before their amount of juice runs out. The catch is that the GamePad screen only shows the playing field and not any fruit, goals, or obstacles. Through carefully examining the patterns of the ground, the player can deduce where different objects are located to either get or avoid them in order to draw an appropriate path. 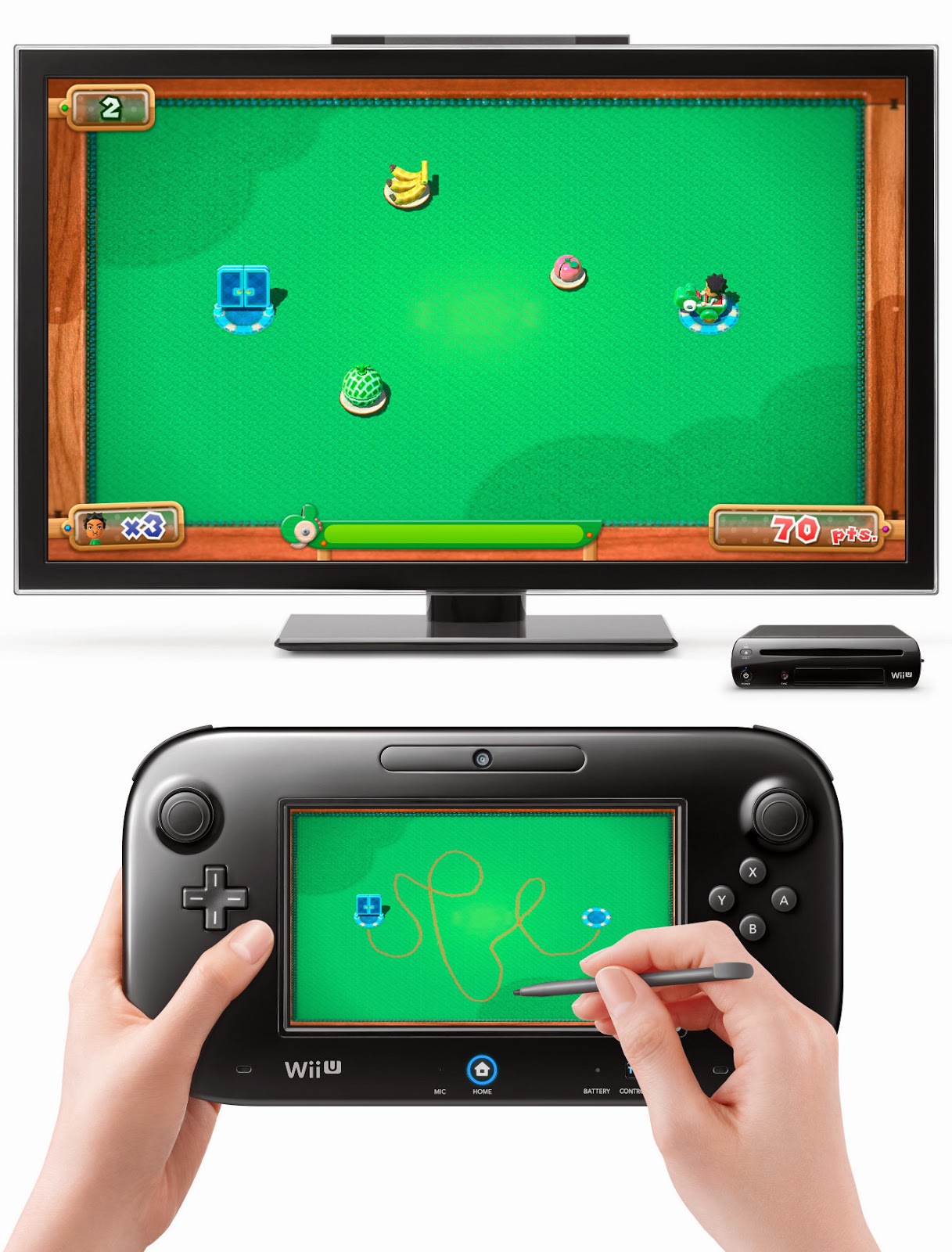 Finally, we have The Legend of Zelda: Battle Quest, an attraction that has the GamePad player donning the familiar Zelda staple the bow, shooting arrows at incoming enemies as they go along an on-rails adventure. Through using the gyro controls and accelerometer of the GamePad, players can get a 360 degree view of impending danger, upcoming enemies, and vantage points to pick off foes from. Certain boss battles have the GamePad player needing to turn the GamePad on its side to dodge an enemy's attack. 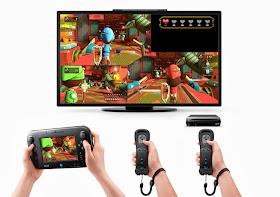 That's just a fourth of the amount of activities in Nintendo Land that utilize the Wii U GamePad in an innovative way. We've just scratched the surface. When you factor in that the majority of attractions show off the capabilities of the controller in unique ways, and that most attractions have a healthy heaping of content to them, it's shocking that Nintendo Land didn't take off better than it did. It truly is a special game, and one that puts the Wii U GamePad to terrific use.

Still, in our collective opinion, the single most spectacular use of the Wii U's GamePad comes from Ubisoft's poor selling launch title ZombiU. Many shrugged off this game as a throwaway first-person shooter, but ZombiU is much more than just a first-person experience. It's true survival horror with an emphasis on surviving. Every time the player loses a survivor of the zombie apocalypse to a member of the undead, that survivor becomes a zombie. That character is no longer available for the player, nor is what they had in their backpack. The player assumes another survivor's body, with the ability to pick up their lost loot. Of course they have to deal with the zombie that is their last survivor. 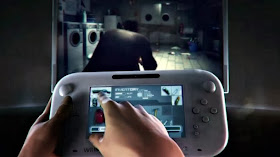 ZombiU's intense gameplay is something that could only be done on the Wii U, and it would only be effective with the Wii U GamePad. You see, in order to manage the limited space of each survivor's backpack, the player needs to have the survivor set the backpack down and rummage through it. However, unlike most other games, the gameplay does not pause. The player's character is still vulnerable to becoming infected by a zombie that can show up on a moment's notice. It's this level of uncertainty and fright that wouldn't be anywhere near as executed as well as it is on the Wii U and its unique controller. 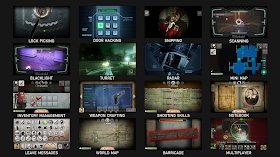 Outside of this major gameplay element and GamePad use, the controller's touch screen serves the purpose of a mini-map, as well as being employed for hacking and inputting passwords into computers. What ZombiU does with the Wii U GamePad is astounding, and what is even more amazing is that the game that best showcases the possibilities and potential of the Wii U GamePad is a title not even from Nintendo, the creator of this device in the first place! Bravo, Ubisoft. Bravo.
Unknown at 11:04 PM
Share

Have a thought to share on this story?
Please let us know what you think.
Stay respectful to everyone on the blog, don't spam (all spam will be promptly deleted) and post away!